Before I started my first company, Inkling in 2006, I was a Senior Manager in Accenture’s Technology Labs group. Because I had shown a propensity for UX design, I was made head of the “Next Generation User Experiences” research initiative alongside my normal consulting responsibilities. For the three years I was in the role I was given a budget and asked by the head of the group to determine what my initiatives were going to be for the year. And each year, a day or two before this meeting, I would madly write a plan and budget, cobbling together what I thought would sound credible or what I knew other people were already working on that I could give more money to. I always suspected everyone else was doing the same thing. The plans would be approved by the senior leadership in the group and we got to spend money on the things we proposed.

Our Lab in Chicago, at the time, had over 70 people in it, and there were 100+ people in 2 other locations. The experience and backgrounds of everyone were truly diverse. Many people had been there for over 15 years, and others were fresh out of college. The group strived to hire people with diverse backgrounds and perspectives. Despite all this talent around me, I didn’t make a concerted effort to reach out to ask very many people in our group what they thought we should be working on, and neither did the other heads of research initiatives. In retrospect, we should have. Instead, I let the position get to my head and thought I should be able to come up with this stuff myself to justify my worth. It just wasn’t in our culture to give up control, or have the humility to ask for other’s ideas.

When it comes to innovation, today’s corporate culture hasn’t changed much. Certainly innovation has become a bigger topic and a lot more lip service is paid to it. There are companies that sell technology to “manage” your innovation process, and every CEO talks about fostering an innovation culture. There are expensive “innovation labs” and multi-million dollar acquisitions to “infuse” innovation. There are town halls, idea drives, and shark tank ripoffs.

But if companies, especially the large ones, want lasting innovation - the kind that permeates everything they do, the kind where “innovation” never has to be spoken about, i.e. “let’s be innovative,” they just are by design, there are two things that have to be fundamentally re-thought: how funding decisions are made and how employees are allowed to spend their time.

In a recent interview with Fast Company, Nike CEO Mark Parker said this:

“You can’t always predict the winners. I end up asking a lot of questions, so the team thinks things through. I don’t say, ‘Do this, do that.’ I’m not a micromanager. I don’t believe in that. My father, when I was growing up, would say to me when I had to make a decision, ‘Well, what do you think?’ And I’d say, ‘Well, I think this.’ And he’d say, ‘That seems like a good idea.’ And over time, I started picking for myself. I didn’t need to go to him. At Nike, we have incredibly strong people. They know what to do.”

The Nike anecdote raises a simple question: why don’t more companies take advantage of the massive investment they’ve made in their people? We’re all capable of so much, yet we still pigeonhole people into role descriptions and ask them to never deviate. In fact, we punish people for deviating.

I recently spoke to a natural resources company that has 9,000 technical engineers. Can you imagine the ideas, creativity, and problem solving capability that could be unleashed if they (and the rest of their employees) were simply asked and allowed to experiment more? And I don’t just mean blue sky stuff. I mean a constant drumbeat of solving problems and optimizing every single corporate process from product/service development to finance to marketing.

I tried to draw a picture of what I’m talking about: 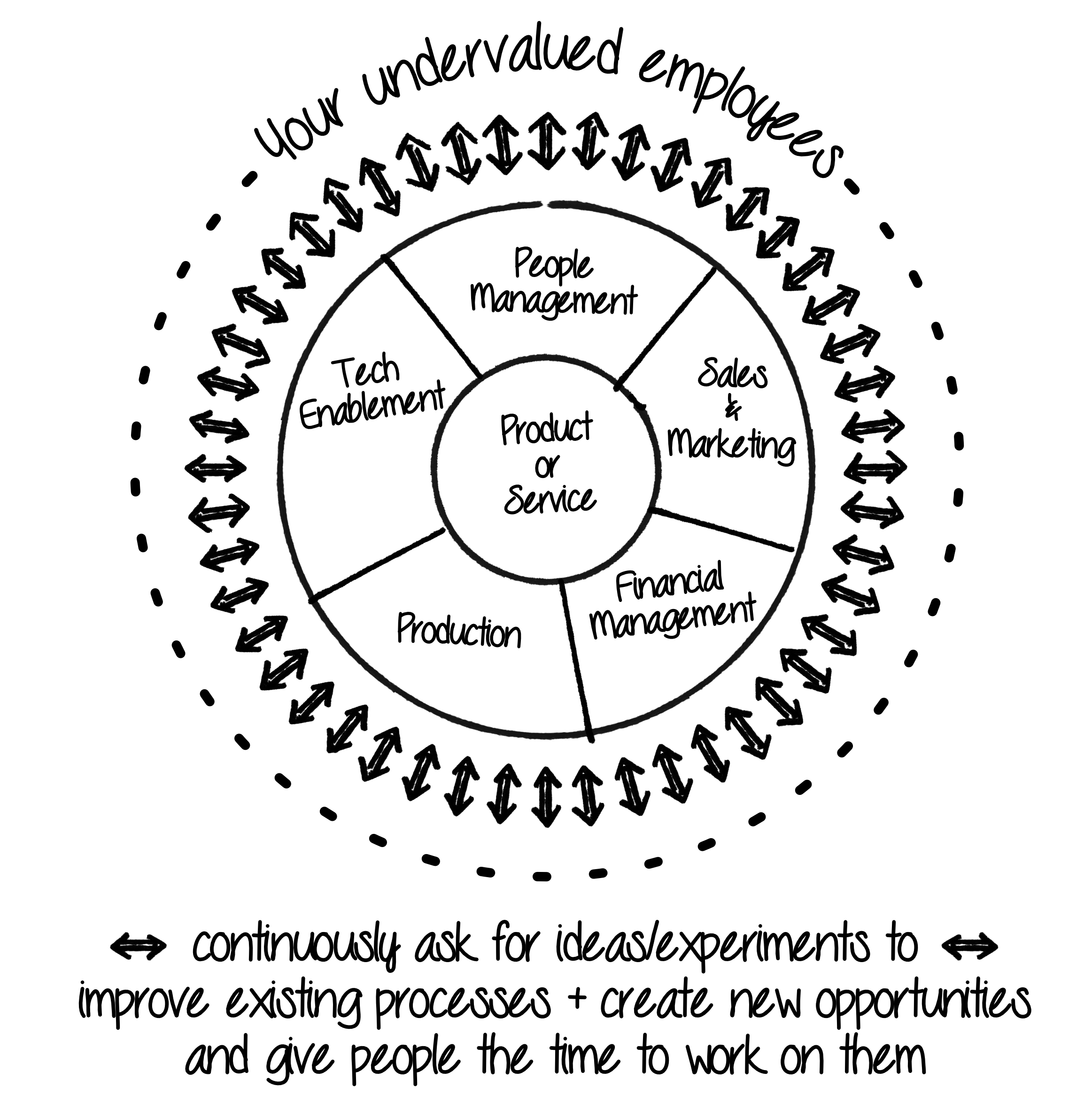 If you’re an executive reading this you might think, “but I/we have an open door policy, if anyone has new ideas or thoughts on how things could be working better, they’ll say so.” But that tends to be lip service only. Even if you’re the nicest person in the company and have a great relationship with your employees, you inevitably have biases that should preclude you from being the only say, not to mention the pressure and politics involved. It’s just not possible for you to know everything, nor should you have to and your people should always have an outlet designed for them, not for you.

We make crowdsourcing software whose sole purpose is to ask for ideas and insights. But even if you don’t use our applications, just start asking more. I guarantee it will be one of the smartest business decisions you’ve ever made.