As I'm sitting in the airport waiting for my flight home from a conference, I had a browse through Hacker News and read with interest this article: "Why iOS13 and Catalina are so buggy."

In it, the author, while describing his beliefs of why he thinks iOS13 and Catalina have issues, introduces a concept I had never heard of before: "schedule chicken."

In a well-run project, features that are lagging behind are cut early, so engineers can devote their time to polishing the features that will actually ship. But sometimes managers play “schedule chicken” since no one wants to admit in the departmental meeting that their part of the project is behind. Instead, they hope someone else working on another aspect of that feature is running even later, so they reap the benefit of the feature being delayed without taking the hit of being the one who delayed it. But if no one blinks, engineers continue to work on a feature that can’t possibly be completed in time and that eventually gets pushed off to a future release.

Reading about this kind of thing drives me absolutely crazy. In fact it's one of the reasons we started the company and one of our primary reasons for existence: to avoid these games by bringing transparency and ground truth to decision making.

If Apple (Hey Apple, call me, I'll give you a great deal!) were to use a crowd forecasting approach, schedule chicken could instead go something like this:

Forecasting question: "Which features will be ready for iOS13 Alpha release on June 1, 2019? 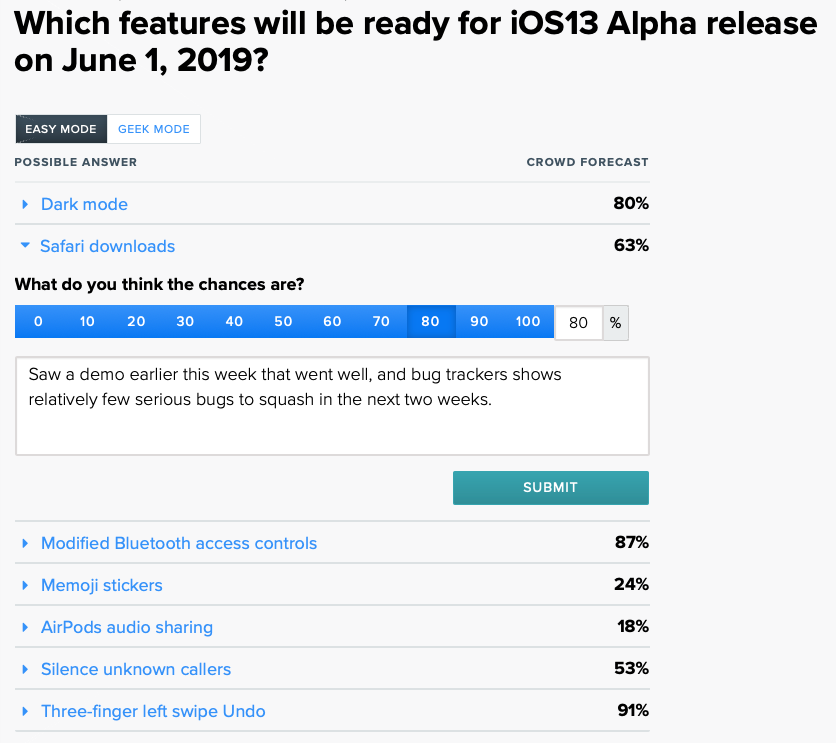 The Apple engineering team, along with designers, managers, and other parties with a vested interest, would be invited to anonymously respond with their probabilistic forecast and a rationale for that forecast. A consensus forecast would then be generated and updated any time someone updated their forecast.

Each week, before the management teams get together to review progress, they would encourage their direct reports to go update their forecasts based on what has transpired in the past 7 days. Then at the management meeting, the "crowd" signal would be reviewed, specifically looking at trends of improvement or degradation. No games, no bullshit. Just reality-based decision making.

Adam is the CEO and Co-Founder of Cultivate Labs.