Attempted Manipulation of our French Election Prediction Market: Here's What We Learned

There is no denying that prediction markets, especially real-money markets like PredictIt and the former Intrade have become a mainstream source of information for those wishing to understand public sentiment about elections, and they are a contributing factor in shaping the narrative of who is in the lead and how the public is reacting to events during the campaign.

For the past several months, we’ve been running a question on our public, play money prediction market, AlphaCast about the French Presidential Election. Here’s the question we asked: 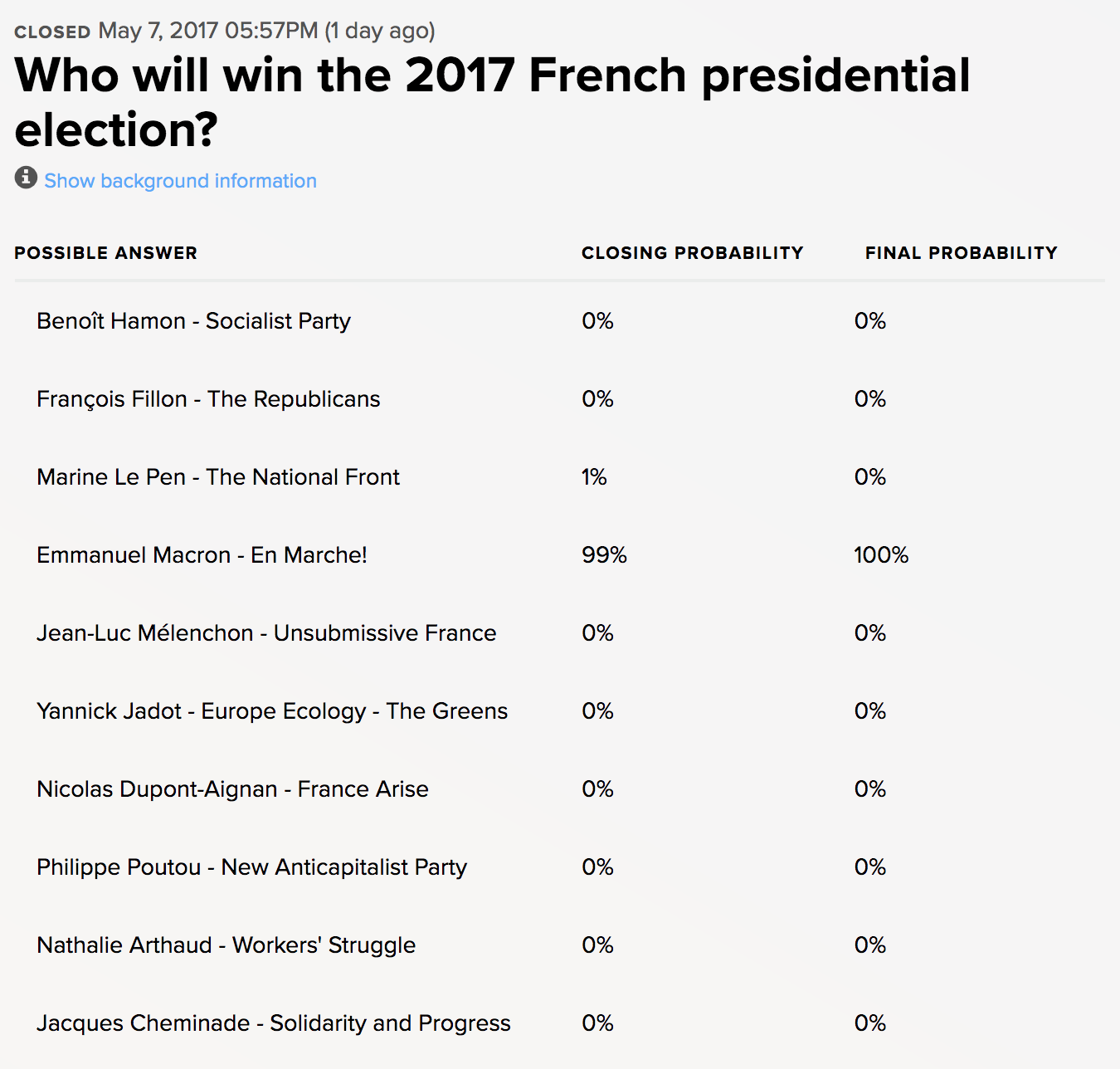 We haven’t been running AlphaCast that long, nor do we market it much so we only had about 1,000 users. But a few months ago, we began having infusions of users from multiple European countries who began trying to create sock puppet accounts to manipulate the prices/probabilities. In AlphaCast, we start everyone off at 15,000 of fantasy currency, so the impact you can have as a new user is somewhat limited. The attempt at manipulation was a basic pump and dump scheme:

Along with tripping some flags, multiple of our regular users alerted us to this behavior. And after looking in to it more thoroughly, it was pretty easy to see the pattern. We began banning accounts, both the sock puppet accounts, and those being used to make profits. As we banned, more sock puppet accounts were created, along with big fish wannabe accounts, but these were also easy to spot and ban.

Interestingly, there was an offshoot of the attempted manipulation - our wealthiest users were able to take advantage of the artificial drop in prices of favored candidates and make much more profit than they would have otherwise. It would be like one day, a prized stock like AAPL were suddenly discounted by 75%. Everyone would want in, but only the most wealthy (and vigilant) could truly take advantage and buy up huge blocks of shares until the price went back up.

In contrast to a real money prediction market, it took our wealthy users 2+ years to build up enough bank reserves to actually take advantage of this opportunity. Minimally they had to be good traders, fairly good predictors, and willing to make a time commitment of hundreds of hours to achieve their status. In contrast, any “dumb (real) money” could play both these roles in a real money market: attempted pump and dump schemes, or big fish recipients just because they're trust fund babies, have rich relatives, or indeed earned their stripes. We never know. This is one time in life where some vigilance from the good guys (us!) and those who have achieved wealth based on skill can actually come together to make a difference.

So yes, the rich are getting richer in AlphaCast, but don't get out your pitch forks just yet, they (sort of) earned it.